One of the names that Pesach is known by is the Festival of Freedom. Today, we extend the idea to realms beyond slavery and physical hardship as experienced in the Exodus story. At the heart of Israel is the freedom to practice one’s religion freely, a sentiment enshrined in the Declaration of Independence, that “[Israel] will ensure complete equality of social and political rights to all its inhabitants irrespective of religion, race or sex; it will guarantee freedom of religion, conscience, language, education and culture.”

However, this idealistic principle has faced many challenges. Judaism is not a single practice; different streams have expanded the religion and culture. In Israel today, there are many instances where Orthodox practices are coercively imposed, especially in public spaces, forcing people to relinquish their way of life at the expense of others.

An interesting case recently occurred in the municipality of Beit Shemesh, an increasingly religious town outside of Jerusalem. For several years, it was commonplace to see signs plastered in public that recommended women ‘dress modestly’, or warned them not to loiter in certain areas. Many felt that these signs were an affront to their freedoms, particularly the right to express their Judaism in their way, and not according to another’s interpretation. 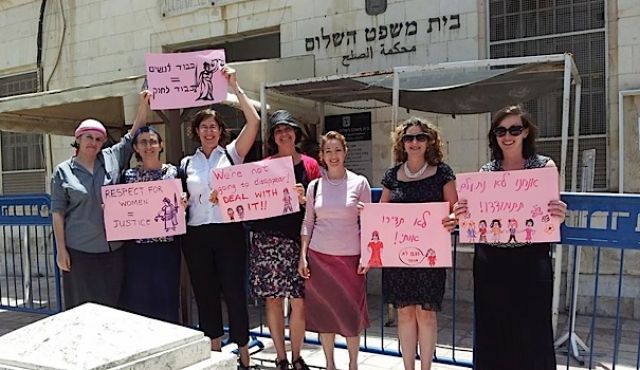 Four Beit Shemesh residents felt that these signs were unacceptable. Orthodox women Nili Philipp, Eve Finkelstein, Miriam Friedman Zussman and Rachely Yair Schloss decided to take legal action to remove the signs that they felt were illegal and were trying to force women and girls in their community to relinquish some of their basic rights.

Working with the Israeli Religious Action Centre (IRAC), the legal advocacy arm of the Israeli Movement for Progressive Judaism and an NIF grantee, these women mounted a successful court challenge to have the signs removed. For Nili it was a “no brainer” working with a cross-communal group in order to bring about her vision of religious freedom and justice. “I don’t have to agree with everything the Reform Movement says or does in order to work together with them on issues we agree on,” she said.

The court ruling of financial compensation and the immediate removal of the ‘modesty signs’ shows that different religious groups can work towards a shared vision whilst maintaining their own beliefs. As Nili summed up, the court ruling “has restored my faith in democracy and law and order in this country.”

She is confident that her experience will help create further change. “I hope it sets an important precedent in municipalities across the country, and in places like bus stations, public health clinics, banks and post offices, so that other women will not have to suffer the indignities that I did walking down the streets of Beit Shemesh.” 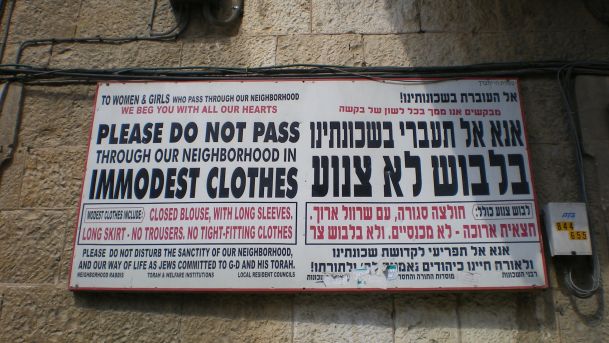 This issue is symptomatic of other religious institutions that impose stringent guidelines on how one must be Jewish. Increasingly these decisions are controlled by one stream of Orthodox Judaism, while not accommodating others. This includes marriage and

divorce processes, ordaining and recognising Rabbis, as well as Jewish conversion. This can have widespread effects. While some of these are more contentious than others, it is clear that many citizens of Israel are not satisfied with the religious status quo.

Read out these statements, which are related to the relationship of different public institutions/spaces, and religious beliefs. Participants raise their hand and indicate their response by raising a different number of fingers, as follows. People can then make comments as to why they chose that response.

- It should be illegal to sell ‘chametz’ products in predominantly Jewish areas during Pesach
- Public transport should run during Shabbat
- Jewish communities can impose their own public rules within their own communities
- Legal marriage in Israel should be run by a single religious stream
- For legal purposes, Israel should have some sort of definition of what it means to be Jewish
- The Western Wall should have a different prayer space for every group that desires one
The recent court ruling to create an egalitarian prayer section at a separate part of the Western Wall was hailed by some, but rejected by others. Do you think it is possible to have a public prayer space that caters to all Jews, or is segregating different streams the only way forward?
Israel was created as a democratic state for the Jewish people. What role do you think religious practice plays in public life today?
Can these places/spaces in Israel be shared amongst Jews from different practices? Place your hands in the air for yes, cross arms for no, place hands on head for not sure:

IRAC has led the fight against religious coercion and monopolies in many areas including making gender segregation on buses illegal, advocating for state money to help fund Reform and Conservative institutions and against the Conversion bill.
75% of Israel’s 8.5 million inhabitants are Jewish.
10% of the Jews in Israel are ultra-Orthodox.